Death always comes when we least expect it.

I have sat by my mother and father’s bedsides knowing they were at death’s door, but still felt a sense of unbelief when the time actually came – they really died? As in, they are not here any more?  I always remember how awful the weeks were leading up to my sister’s death and I just wanted it to be over – but somehow did not realize that “being over” meant she would be gone.

Keith and I are going through that now after the death of our sweet kitty Nellie, who was part of our family for 13 years. I wrote about him in The Mighty Hunter just a few months ago.

When you have someone old in your life, a friend, family member or pet, you know that the day will come when you will have to face their death, but you want to put it off as long as possible. Several times over the past few years I thought we were at that point with Nellie, like the time he ate a bird and got so constipated I had to rush him to the vet or times he stayed out all night and I was sure a coyote had gotten him. On those days I prayed, “Lord, I know this day is coming, but don’t let it be today.” When we couldn’t find him Thursday morning, Keith assured me he was fine, probably out at the shed. When we found him sleeping so soundly in the monkey grass that he didn’t stir when I called, we were still sure he was fine, just really tired. So I didn’t pray for the day to not be today. Around noon he woke up, staggered around, and just died. Thursday was the day.

Grief is about adjusting to things being different. Not having Nellie around is not life altering like losing a husband or child or mother, but it is routine altering. Practically every aspect of our daily life, from sleeping to eating to working inside and out – even our bathroom habits – involved our small cat in some way.  Now we are seeing empty places all over the house and yard.

I always thought God brought Nellie to us. We were in between pets, and I had prayed for another cat. One day I was washing dishes and looked out the kitchen window and a scrawny little orange cat was looking at me and meowing up a storm – “Feed me!” We fed him, took him to the  vet where $200 later he had gotten shots and been treated for a cough. A few days later we realized he was the same cat that someone had brought our neighbor and his name was Pumpkin.  As soon as they had put him down in the yard, their dog took out after him, he ran across the road and then this house cat, who had always had a food dish at his disposal, fended for himself in the woods for 2 weeks. No wonder he was happy to stay with us for the next 13 years! Adam was in his rap music phase, so named him Nellie for the popular group of the time. Since Adam went away to school it has been the three of us living here, Keith and Nellie and me, getting older and more set in our ways each year.

He made us laugh – he often reminded me of a toddler. If I was at the table paying bills or writing a note, he would sit in my lap and try to get the pen out of my hand, or push papers to the floor just to see them drop. On long winter days, he would get bored and play with the toy we fashioned him – a ball of yarn tied to a toy mouse, which he rolled all over the dining room, under tables and chairs. We never knew where he might choose as his new sleeping spot, the white living room couch, my book bag on the floor, the clean clothes I left out on the blanket chest.  If I sat down on the couch with my Ipad or laptop, he was there too, and I have often typed with him lying across my lap as my wrist guard.  He and I did our devotionals together each morning, and I would have to brush cat hair off my Bible on Sundays.

The winter was hard on him, but he had been like a kid with the warm weather this last month, staying outside until dark. He loved to sit on the landing by the back steps, like a king surveying his kingdom. He had even killed a small rat and eaten his favorite part, the head, leaving the rest on the stoop for us. His last week was perfect and he enjoyed it – what more can any of us ask?

I came across this quote and have been thinking about it today:

Nellie was the soul of our home, a place where we can be completely relaxed and safe, where we feel loved and cared for. His trust in Keith and me was complete. His little purrs of welcome in the morning and afternoon let me know that no matter how my day had been, he was happy to see me and would love me. That’s what family is all about. 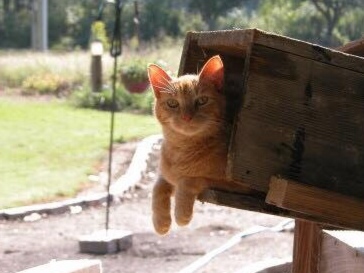 8 thoughts on “Good-bye to the Mighty Hunter”