2016 has been a watershed year for my family.  In May our son Adam married his soulmate Jess, a beautiful, smart, spunky young woman who is his equal in everything but height. Preparations and anticipation of the big day took up most of the first half of the year.

In September, my aunt Beth stepped over to heaven after a long struggle with cancer. And along the way I had some affirmation of this writing journey I’m on by having an article published in a local magazine, a piece about my media center included in a national reading blog and a devotional printed in an actual book. It has been a year of emotional ups and downs.

I’ve had other memorable years – 1976 when my sister died; 1986 when I was ordained, started dating Keith and got married to him in November; 1988 when we bought our house in Sugar Valley, got our first dog, our sweet German Shepherd Steffie, and had Adam. As Adam grew I remembered years based on his grade in school – I went back to college for my media specialist degree in his third grade year, Daddy and Keith’s mother both died when he was in eighth grade, Mama died in his first year after college. The years start getting muddled up for me now that he has been out of UGA for several years.

Watershed events are those that change our lives. Merriam Webster defines watershed in a figurative sense  as “a crucial dividing point, line, or factor” or a turning point. One interpretation of it is the ridge where water begins to flow in a certain direction and I have always thought of it like the top of a waterfall, the place where one hangs for just a moment before falling over the edge into the lake or river below. Once that water has taken the plunge there is no going back. We can all think of those times of change and upheaval that we look back on as “before and after” events – “before I was married,” and “after Mama died.”

I did a little studying and found out that actually the scientific word watershed does not refer to a waterfall but to all the land in an area where the water flows in a certain direction toward its ultimate destination. For example, the Mississippi River watershed takes up almost half of the United States as all the little creeks and tributaries and underground water sources slowly drain into the Mississippi River and towards the Gulf of Mexico. All land is a watershed, since all our rainwater goes into the water supply and heads to the ocean at some point.

So while we celebrate the watershed days, the graduations, weddings, births and funerals, each day is equally as important. Details of the momentous days stand out – I still remember what I was wearing the day my mother in law died – but I wish I could go back and relive those common days, those times when nothing life changing happened, Although some memories survive, and pictures and journals help, my brain can only hold so much and the little details slip away.

Just like the drops of rainwater make their way to the sea, the significant events in our lives are a culmination of the little day to day encounters. Adam and Jess’s beautiful wedding last May really started on the day they were each born, as they grew up with loving families and began to develop an idea of what kind of family they would one day like to have, both consciously and subconsciously.

For the rehearsal dinner the night before the wedding, I put together pictures of Adam and Jess at different stages of their lives, Jess growing up in upstate New York,  Adam in northwest Georgia. The photographs showed them both as toddlers with their grandparents, as children going to Disney World, as teens playing sports and then graduating from high school and both choosing UGA, where their paths eventually crossed. They became  friends and met up again in Atlanta after college, when the time was right for their relationship to blossom. 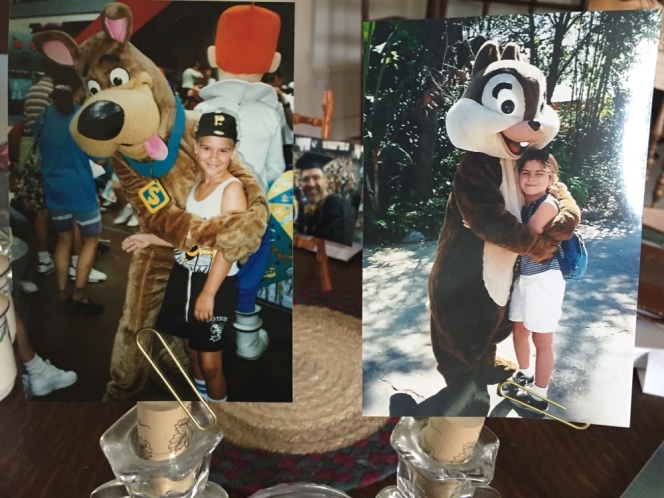 I envision their lives as water flowing into tributaries, each heading for the river where their days would eventually flow together, culminating in that soft spring evening in Athens when they pledged their lives to each other. Jess’s parents and Keith and I had prepared the way for them.

As we are finishing up the Christmas season, I’ve thought about how Jesus’s birth was the greatest watershed moment in history, but it also did not happen all at once. John tells us that “In the beginning was the Word”, meaning that the Christ child’s entrance to earth had been planned for perhaps millions of years, since God first divided the heavens from the earth. One of the things I love about the Bible is how it all fits together, how all throughout the Old Testament we are told of the coming Messiah. Each of those unnamed Hebrew believers, each of the prophets and kings and priests who stood fast to their faith, were preparing the way for the Messiah to come. In the same way, the small acts of kindness we do make a difference.

So as we change the calendar to 2017, I want to celebrate the normal days as well as the life changing ones – the days of orange and pink sunrises, heart to heart talks with those I love, laughter, new friends, rejuvenating runs, books that creep into my soul, music that fills me up and the mystery of the Holy Spirit working in my life. I know that these will prepare me for the watershed days that lie ahead. I wish the same for you.

9 thoughts on “A Watershed Year”