I just returned from a Spring Break trip to Gettysburg, New York City and Philadelphia with a group based out of Whitfield County Schools. I haven’t done a group trip since I was in high school, so I was a little apprehensive. Keith, Adam and I always took off on our own and I tend to be pretty independent, so I wasn’t so sure how I would do on a bus full of folks for 6 days. But happily the group was very congenial, I made some new friends and had a blast.

The definite advantage of a group trip was having someone else worry about traffic, tickets, timing and all of those things that take up so much energy when traveling on your own. We had a remarkable driver and trip leader, (who actually had to step in at the last minute when the original leader was in a very serious wreck the week before we were to leave) who added lots of humor. I loved riding in the big bus and looking out at the scenery going by,  relaxing and reading on the long trip up and back and having the driver drop us off at our destinations. Our days were jam-packed.

However, group traveling has its disadvantages. Like a lot of things in life, some of the good things – riding in the bus, having everything pre planned – were also the things that bugged me.

My son Adam and I went to NYC ten years ago when he was a senior in high school. It was a celebratory trip for both of us, since I had just finished my specialist degree and he had been accepted into UGA. We planned the trip around seeing Spamalot on Broadway, the hilarious Monty Python play that had just come out. We stayed near Central Station at the Roosevelt Hotel and walked or took the subway everywhere. We had a great time exploring.

So I was frustrated that on this group trip we spent a lot of time inching through the New York streets on our big tour bus. Even though the weather was not the best, I was itching to get out and walk. We finally got a chance outside of Rockefeller Center and that’s when I felt the famous “rhythm” of the city, the noise and smells and the crush of the people all rushing and pushing down the sidewalks.

On our second night in New York, one of my new friends, Rhonda Gazaway, was as excited as a little kid to be in Times Square. We had spent our money in the tacky tourist shop, taken lots of pictures and climbed up on the steps in the middle of the square with all the other gawkers. Rhonda said that what she really wanted to do was not on the itinerary – go to the “Charging Bull” statue on Wall Street. We had about two hours before having to be back to the bus, so our little group decided to go for it. Rena figured out the subway schedule with her phone and we took off for an adventure. I felt like we were playing hooky – it was the most fun of the trip.

Five Northwest Georgia ladies with “Out of town yokels” practically emblazoned on our backs managed to to get the metro tickets out of the machine, maneuvered through the labyrinth of subway tunnels, got directions from several friendly New Yorkers, talked to most everyone on the subway car and made it to the bull without getting mugged. Once there, we all had to take pictures with the bull’s “jewels”, which are supposed to give you good luck when you rub them, and with the little girl statue who is now there standing defiantly in front of the bull, saying “I can take you!” We laughed and cut up like a bunch of kids. 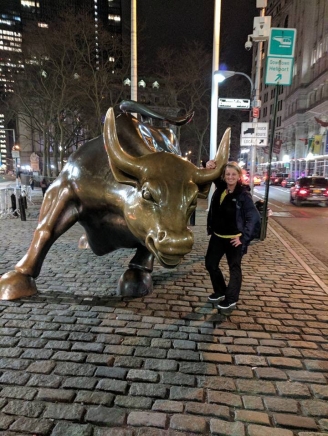 Rhonda by the Bul

We decided to take a taxi back, since our time to meet the bus was getting close. I pulled over one of the yellow Prius taxis. The driver, a neatly dressed Indian man, said that he was only supposed to take 4, but that because we were tourists, (gosh, how did he know that?) he would squeeze us in, even though he could lose his license. I got in the front and Kelly, Rhonda, Rena and Kayla piled in the back. The driver said that since we were breaking the rules he was going to turn off his meter and if we were stopped we were to say we were friends of his. Yeah, like that would look plausible! And he added that we would be sure to give him a good tip for his trouble, and we were paying cash, correct?  After staying off the main drags for fear that a cop would see him, we made it back to Times Square in plenty of time. We rolled out like we had been hitting the booze all night (which we had not!) and made it safely back to our group.

I learned something from that outing. Sometimes we sit back and watch life go by the bus window and sometimes we have to get out and be a part of it. I had resolved to do things this year that scare me (see my blog here) and this bus trip, as well as the subway ride to the bull, were out of my comfort zone. As I’m getting closer to 60 I find myself worrying more and more – “Can’t do that, it’s a school night,” “Can’t go there, I might get too tired.” Next time I feel that way I’m going to remember leaving the relative safety of the crowds at Time Square and going on a quest for a little girl and a bull.

If you are interested in learning the story of the little girl statue, watch this video from NBC Today.