After almost a week of snow days, I am now off from school for another week for “Winter Break”.  I started the break feeling a little  down. For most of my adult life, time off meant going home to North Carolina to visit my parents, but since my mother’s death a year and a half ago, that has changed. I am still processing these changes.

Up until my father died 10 years ago, visits home were fun, relaxing times. Mama would cook, I would lie on the couch, sleep, shop, and visit friends and family. After Adam was born, the visits centered around his time with Mama and Daddy, and our other family in Greensboro. We went to the park, fished, rode bikes and enjoyed wonderful meals together.

Daddy’s death from Parkinson’s disease in December of 2002 changed that routine. My mother’s life was centered around my father and I will probably never know how difficult her life became when she found herself alone after 53 years of marriage.

When one parent dies, the balance shifts, and I now felt the need to be there for her. She decided to move out of the big house she had lovingly tended, into an apartment in a retirement center in Greensboro called Friend’s Home West.  Now our visits were centered around helping her clean out and get moved. We sorted through a lifetime of memories as she chose the furniture, pictures and other items that would go with her to the apartment.

Her apartment was beautiful, sort of a mini-version of her house.  Adam and Keith and I could stay in a guest room in the facility, or sometimes, if I was by myself, we would get a cot and put it up in her small den. We tried to act normal on these visits, but now our meals were either take-out eaten at her new table in the apartment or we would go to the large dining room of  Friend’s Home where we ate with the sweet ladies from her church who also lived there. Mama seemed lost without a house and husband to care for, but she tried to put on a good front.

Mama and her bridge club in her apartment, 2004

She was struggling with declining vision and lung capacity, as well as depression,  so after about a year and a half, she made the decision to move to the assisted living part of Friend’s Home. We now downsized her apartment into one room, keeping her writing desk, her big dresser, recliner and doll collection, as well as her wedding portrait and our baby pictures. She also kept the small child’s rocking chair her parents had given her when my sister Anne was born, with the big Raggedy Ann doll  Anne had made sitting in it.  Anne passed away from cancer in 1976, so I am sure the rocker and Raggedy Ann were a way to keep her close.

Adam and Mama outside her assisted living room, 2007

The assisted living unit was ideal for her. She could walk down a short hall for her meals, she had social interaction with the nurses and aides that worked there, and she could still see her friends and play bridge. But as her vision became worse she eventually gave up her bridge game that she loved and spent most of her time listening to books on tape, provided by the Society for the Blind. Now when I visited I stayed in the guest room or sometimes got a hotel. We still went out occasionally to visit Daddy’s family in Winston-Salem or to my cousin’s farmhouse, but she felt safe and comfortable at the assisted living, so most of our time was spent there.

She continued to become less mobile and one day she tried to pick her walker up to step over a cord in the hall and went down. She broke her hip and the decision was made to move her across the breezeway  to the Nursing Care wing. She grieved leaving the nurses and aides in the assisted living unit. Her room was now smaller, so the writing desk went to Adam and the doll collection came home with me, but we still had the dresser and recliner and little rocking chair. She told me, “This is the end,” and of course she was right. She knew that the nursing home was the last stop.

At one of her favorite places, Garner and Butch’s farm, Thanksgiving, 2009

They were good to her there, but she slowly declined.  I still stayed in a guest room or a hotel, or sometimes with my good friend Laura Lomax, who took wonderful care of me. I was able to reconnect with old friends, and often my cousin Garner came and we stayed together and were like girls, laughing and cutting up. I tried to go to see Mama every month.  As her mental state declined, she became very anxious and wanted me with her every minute. I would get back to my room after 8 or 9, exhausted. She was on oxygen and was almost totally blind and deaf. She still got around on a walker some, but was confined to a wheel chair most of the time. Church members and her faithful friend Rachel came by,  but her limited vision and hearing made visits difficult.

Mama’s 84th birthday, January 2011, with Garner and my aunts, Mary Frances and Libby

So after a very difficult year of declining mental and physical health, she went to heaven in September, 2012. I felt relief that her suffering was over and that the ordeal of constantly worrying about her and going up there had ended. I brought the little rocker and the wedding and baby pictures home with me,  Adam and Garner took some things, and we left the rest for Goodwill. 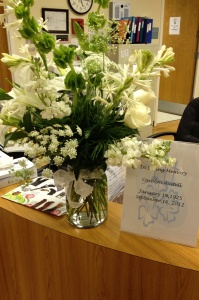 During her last year, I often wondered how I would feel when it was over. A year and a half later I am surprised at what I miss. I don’t miss the trip or having to try to manage her care long distance. I don’t miss the stress. I don’t miss being away from Keith and my life here.  I don’t miss Mama the way she had become. I know that sounds bad, but she was not herself in those last years. I do miss the time I had with old friends and family, although they have all assured me I  always have a place to stay when I come back.

What I miss the most is that little room in the nursing home.  Somehow, when I was there with Mama, I felt like I was still in her bedroom in the big house on Canonero Drive. The faint smell of her perfume was in the drawers of her dresser,  along with her clip-on earrings. In a cup next to my high school graduation picture were the little scissors that she kept  in the kitchen and the pens that bore the name of Daddy’s company, Mark IV Personnel .  The coasters from the den were still on her bedside table. When I was in her room with her, I belonged there. I was Mrs. Austell’s daughter. I was at home.

To say that Mother represents home sounds trite, but it is true. I felt this on my last trip to Greensboro. Even though I was warmly welcomed by family and friends, I felt strangely lost. When you lose both your parents, the balance again shifts. Now I realize that I am the senior in my family and I think about how it will be for me and for Adam when I am old. I hope that I will not feel like a burden to him, but chances are that at some point I will. And in a way, that is okay. It is part of the circle of life, and when I am gone, I hope that he grieves, but that he looks back on what I have given him and is grateful for the feeling of home that comes with Mom. 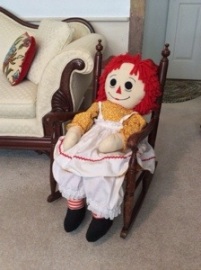 8 thoughts on “The surprises of grieving”